Far Cry 5 had the potential to say something interesting by setting the game in America, but its murky story and themes do more to taint the game’s fantastic and playful open world than to give it purpose and meaning.

The goofy world and the serious story never line up, making this one of the rockiest entries in a series that has already delved so deeply into action tourism. It’s yet another mainstream game that takes crisis or tragedy and builds a Ferris wheel on top of it, while intimating that you’re bad for wanting to take a ride.

Far Cry 5’s story starts on a hollow note and never improves. The Project at Eden’s Gate, a religious cult whose followers are pejoratively called “peggies,” wants to carve out a chunk of land in the U.S. where its members can enjoy their religion and guns without being harassed by the government. You, of course, represent the government. As a deputy sheriff, you initially try, and fail, to arrest their leader, Joseph Seed, in a lengthy action scene that ends with you being rescued by a “prepper” who just so happens to be ready for exactly this sort of situation.

It’s a timely story that could at least try to address the polarized nature of current American politics, or talk about the issues inherent in a country that seems to worship firearms. But I never saw anything that hinted at how these cultists were radicalized. And their ultimate goal, revealed at the end of the game, undercuts any grand statement. 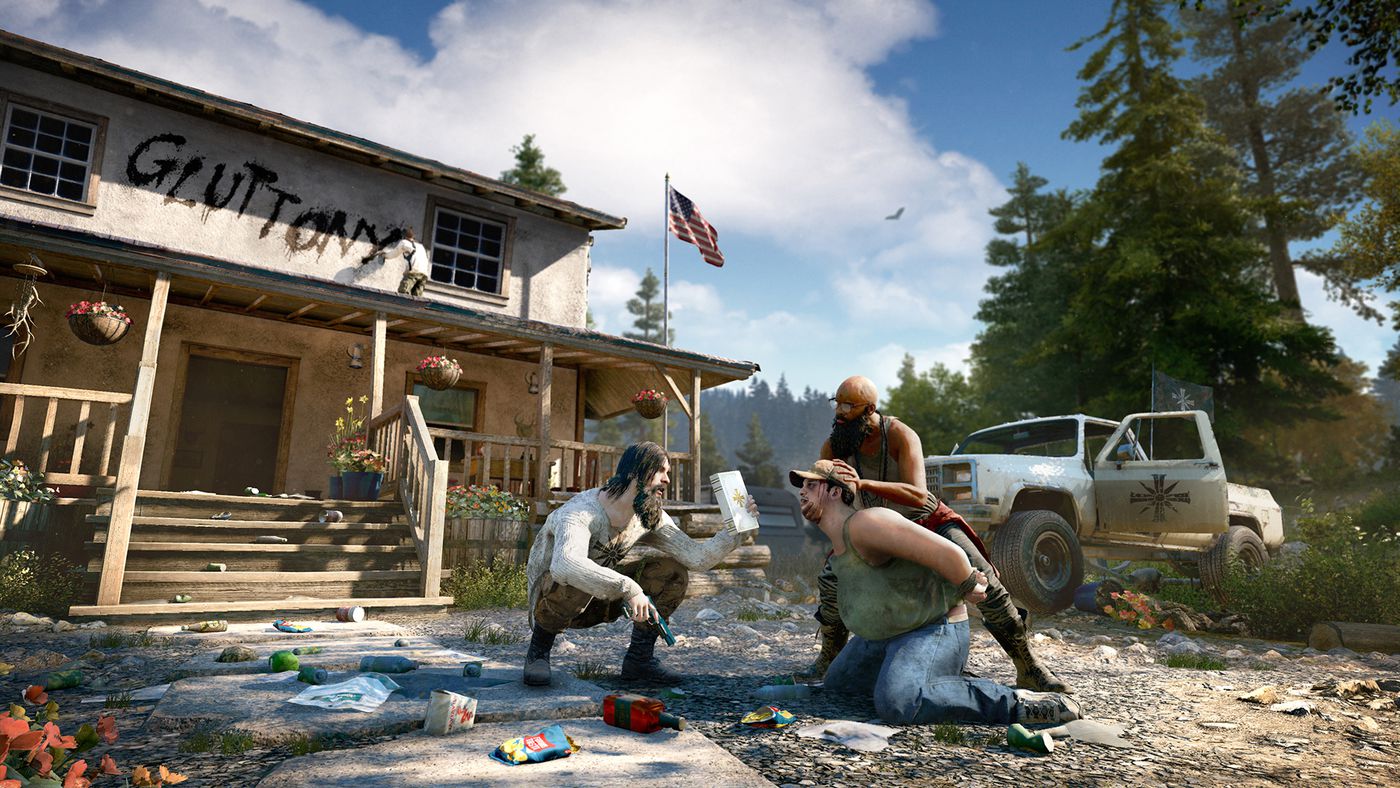 The “everyone is bad!” argument pops up often. In one jaw-dropping sequence, you leave a scene of torture perpetrated by the bad guys, only to end up in the bunker of the “good guys.” Guess what they’re doing? If you said “torturing someone to get information,” you win. These two situations literally happen back to back, without anyone in the game remarking on it. You can be in a cult, or you can fight a cult, but torture is worth it and effective either way!

Equally flabbergasting is that many of the peggies are taking part in this violence because of a drug called “bliss.” You can tell when characters are under the influence of the drug from the green cloud around their heads; bliss is used as a shortcut to get away from realistic storytelling and dive back into tired video game tropes. A boss fight with a character who warps around the level, complete with a health bar, is as ridiculous and pointless as it sounds. The drug is meant to dehumanize the characters, so you feel more like you’re gunning down zombies than humans. However, the game totally fails to recognize the horror of shooting American drug addicts while the nation deals with a very real ongoing opioid crisis.

The general absence of context in Far Cry 5 feels intentional, as if to smooth over any potentially controversial edges. You’re fighting against a conservative religious cult that has taken control of a big chunk of Montana, which made some conservative and Christian commentators uncomfortable during the game’s initial marketing.

Those folks shouldn’t worry; any thematic point to be made about religion, the United States or the current state of the nation’s politics is quickly thrown aside to make way for all sorts of jokes and lighthearted hijinks — although you’ll also see a lot of crucifixions in your travels. It’s clear that this is a cult based on Christianity, but holy hell, is the game careful to dance around that fact. Ubisoft wanted the evocative art of these religious references for the marketing of Far Cry 5, but the game itself is too timid to do anything with them, let alone dig into their historical baggage.

Even the lead character is a blank slate. You have no name or backstory other than being in law enforcement. You get to choose whether you look masculine or feminine before diving into the robust character creator to craft your look, from skin tone to clothing. You’re called either “deputy” or “rookie” as the game progresses, and you never speak. This must have made it easier for Ubisoft to offer co-op through the entire story (even if only one player is able to make progress in the story in their saved game in this mode), but it’s definitely a shift from past Far Cry games, which made the player character a large part of the world and lore.

ANY THEMATIC POINT TO BE MADE ABOUT RELIGION, THE UNITED STATES OR THE CURRENT STATE OF THE NATION’S POLITICS IS QUICKLY THROWN ASIDE

It’s a shame that Far Cry 5 is propped up by a weak story with bland characters, because behind the plot is an open world filled with what Far Cry as a series does best. Between story missions, you’ll be assaulting bases and tackling side missions to regain control of geographic areas, and you’ll unlock a progressively impressive list of vehicles to get around the countryside. That includes planes, in a series first, although the flying controls are so arcadey that the inclusion doesn’t feel like a huge departure from previous games. Bombing runs against cult convoys sure are satisfying, though.

All of Hope County, Montana, is unlocked the moment you stagger out of the bunker in the game’s opening — nothing is gated, and hunting has been demoted to a sport that’s only done for money. That’s right: You don’t have to kill adorable wildlife to make progress or upgrade your gear. Improving your character is done through the perk system, and you earn points by completing challenges like killing a certain number of enemies with explosives. You’ll also find perk upgrades in the bunkers you raid from doomsday preppers who have fled the area.

Briefly, on preppers: There’s this strange subtext to Far Cry 5 that will openly tell you that preppers were right to fear the worst, but it’s undercut by the fact that so many of them fled when things got bad. I guess they weren’t as willing to fight against an insurrection as they thought?

The lack of story depth is a shame, because this is one of, if not the best, playgrounds in the Far Cry series. Far Cry 5 feels like Ubisoft Montreal has learned which parts of the past games felt like work and which parts were fun, and it has focused with great intensity on producing more of those fun parts. A character even cracks a joke about not forcing you to climb towers around Hope County, a wink at one of the series’ most overused side objectives. Every part of Far Cry 5’s systems for progression and reward feel tuned to within an inch of perfection, and my favorite hours of the game were spent fishing, exploring the open world, and gaining more perks and tackling the interesting little puzzles that make up each prepper stash.

Montana itself is modeled with an eye toward the region’s natural beauty, and the setting looked wondrous in my time playing on a PlayStation 4 Pro hooked up to a 4K display. The nature-trotting portions of the game feel like a commercial for the state. I want to take a break from murdering all those cultists to just camp for a few days, but alas, there’s always someone around who needs killing. The game does at least reward your fishing efforts. I wonder how much more I’d enjoy Far Cry 5 with a combat-free tourism mode akin to the recent add-on for its sibling series, Assassin’s Creed.

I also appreciated the unexpected silliness of Far Cry 5. One of the best additions to the game is an escort system that allows you to hire and fight alongside up to two other characters from a pool of people you meet in the game, each of whom brings special skills into combat. That’s all well and good — it’s nice to have a sniper who’s got your back — but you can also befriend and hire animal buddies to help you in your travels. I stopped paying attention to the human sidekicks after I started prowling around Montana with a cougar and a dog as my companions.

The animal hijinks don’t stop there. During one liberation mission, I aimed at a cultist, missed my shot and accidentally freed a bear. The bear was set on fire somehow, and the fire-bear ate a bunch of people while I watched through my weapon’s scope. That was a pretty good time. And I can’t count the amount of times I rescued friendly citizens from the militia, only to have them be eaten by cougars. 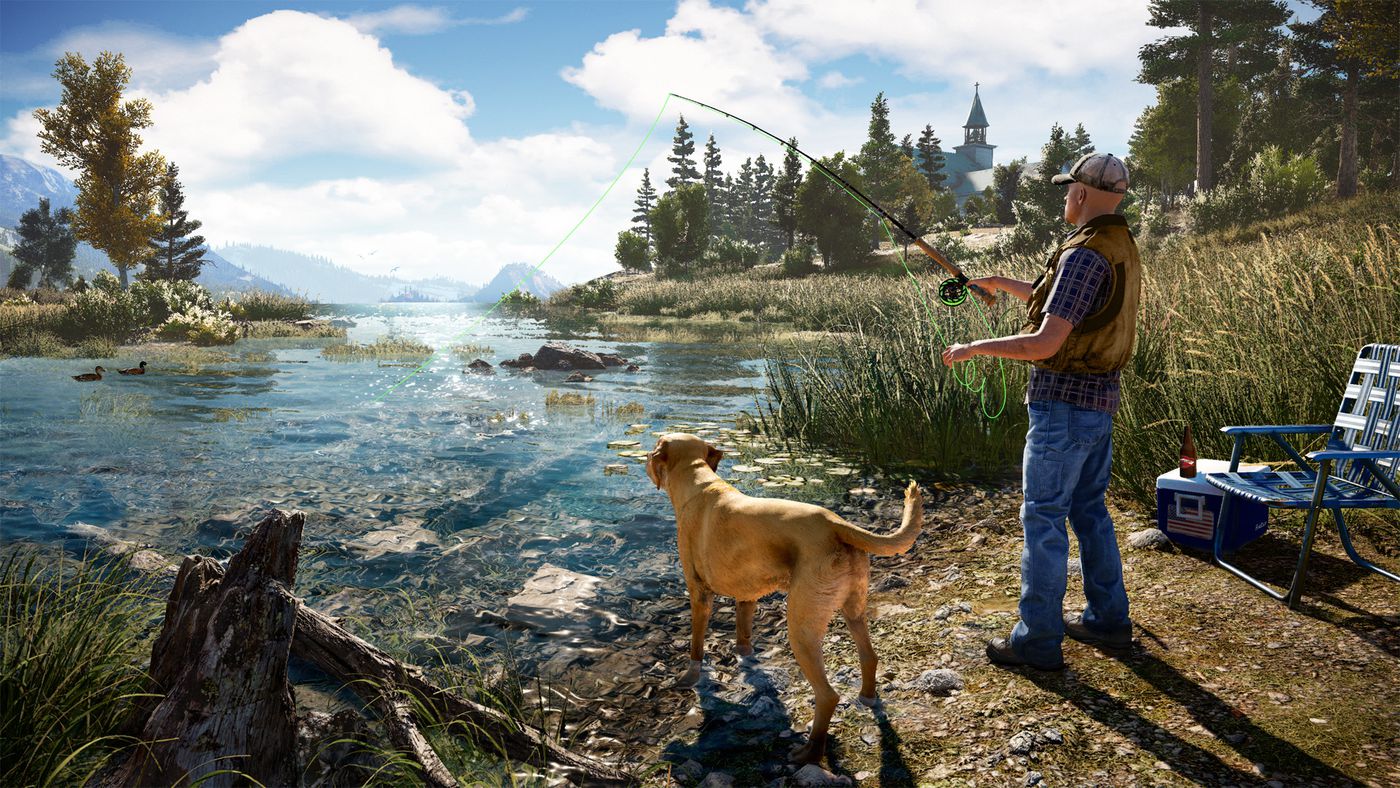 Far Cry 5 also introduces an arcade mode (playable solo and in co-op) that includes a powerful map editor, allowing you to create challenges and share them with other players, who can earn cash and perks that will be helpful in the campaign. The arcade mode is accessible through the arcade cabinets you find around Hope County. I had a blast playing through some of the early levels created by Ubisoft’s designers, including one strange experience that took place in a topsy-turvy haunted house. Hopefully the community will come up with some interesting stuff after launch.

For now, we’re left with the core campaign. Far Cry 5 uses the religious and isolationist divides in America to set up a story without ever addressing their history and their very present danger, and the story seems to give most of your enemies a get-out-of-jail-free card to explain their actions.

They weren’t bad; they were just drugged! And the main antagonist, well. if you hadn’t picked a fight, maybe none of this would have happened! This sort of argument — that you are complicit in the violence that the game portrays and the villains take part in because you decided to play the game — was interesting when Spec Ops: The Line did it back in 2012, but has grown tiresome in the repetitions since.

Far Cry 5 makes fun of everyone on the political spectrum, without ever taking a clear stand except to say, with toothless confidence, that murderous cults are bad. But maybe fighting them makes you just as bad, and in the end none of this matters anyway! It’s a story that goes nowhere and ends with a whimper, at least in the ending I saw. There seem to be two endings, although I doubt there’s a way to salvage the narrative in the last minutes after so many blown opportunities.

What’s left if you have the stomach to ignore the story? A very enjoyable game with an immense number of things to do, a beautifully recreated portion of the United States, and a collection of missions with wildly varying tones and structure. It’s a finely tuned open-world game stapled onto a story that’s insultingly bad.

You can listen to Polygon’s podcast, about the FarCry 5 game here: