The Lenovo Yoga 920 is the direct sequel to Lenovo’s Yoga 910 convertible laptop. Before every Windows PC company was making 2-in-1 computers, it was Lenovo’s line of 360-degree hinged laptops that pioneered the form factor, which combines a laptop design with some tablet functionality.

If you’re keeping track, improvements made since the Yoga 910 include the addition of Thunderbolt 3, new webcam location, a Windows Precision touchpad, better battery life, heat management, and finally, the bundled active pen.

Now that there are so many other 2-in-1 convertibles, including excellent options from HP and others, what makes the Yoga 920 special? It turns out, quite a few things. 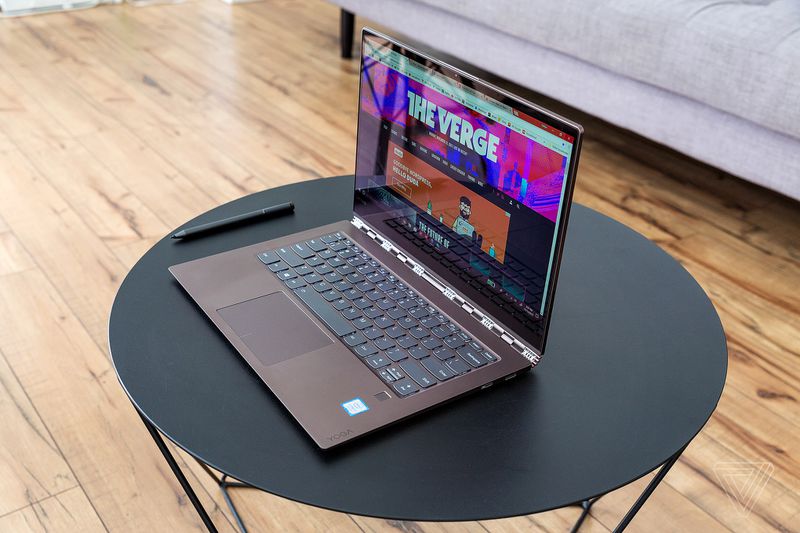 Lenovo’s hinge design for the Yoga laptops has become its signature, like the oddly placed camera on a Dell XPS 13, or the Touch Bar on a MacBook Pro. It’s perhaps one of the most robust and unique laptop hinges in use. It reminds me of a metallic mesh watch band (my favorite), but the design not only allows the screen to flip fully behind the keyboard, it also hides the computer’s ventilation system.

This particular Yoga 920 has a bronze metallic finish throughout. You can go for platinum or copper instead, but I’ve taken a particular liking to this color scheme. It makes the Yoga 260 look even sleeker than its 0.55-inch thickness would lead you to believe.

However, this smooth finish and color makes it a fingerprint magnet, which means it requires quite a bit of upkeep to stay spotless. That also goes for the 13.9-inch touchscreen, but I’ll address that later.

Aesthetics aside, its structural integrity is what makes it awesome. There’s no flex, and no sense of flimsiness anywhere with metal chassis and accents everywhere.

Consequently, the heavy use of metals makes the Yoga 260 — you guessed it — heavy. Its three-pound weight isn’t abnormal (the 13-inch MacBook Pro weighs about the same), but other similar Windows PCs, like HP’s Spectre 13 x360, weigh noticeably less. I don’t consider it a deal-breaker, but I do feel the added weight on my shoulder when carrying the 920 around.

Despite the high mark the Yoga 920 scores in the design department, nothing is perfect, and that’s very clear when you learn about Lenovo’s storage solution for the included pen. It’s basically a 3D-printed piece of plastic that clips into the computer’s sole USB-A port and offers a slot to slide the pen in.

Yes, you’ve sacrificed your only full-size USB port to hold the pen with a piece of plastic. A magnetic solution would be better. 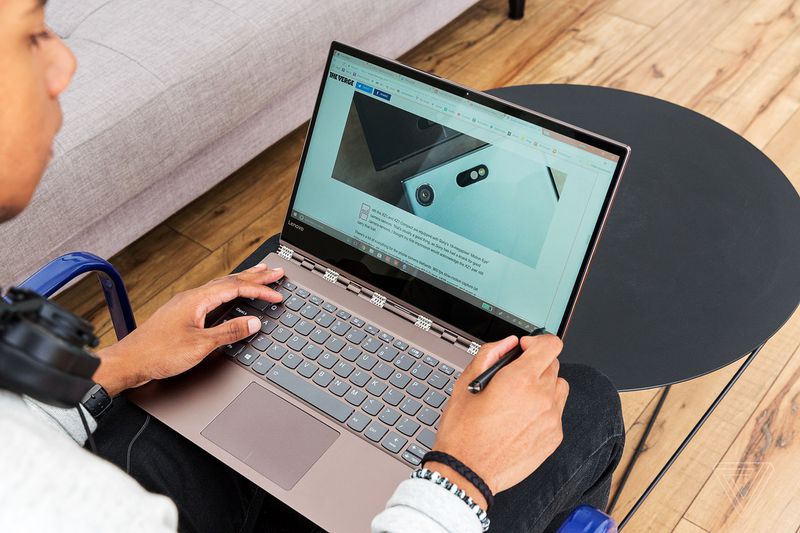 One of the many things I enjoyed about using the 920 every day for two weeks, was how easy it was to live with. All methods of input, which include the precision touchpad, touchscreen, keyboard, and active stylus were accurate, with no malfunctions or evidence of subpar build quality. I never once had to fight the system to use it, a trait I often attribute to Surface devices due to solid marriage between software and hardware.

Typing on the keyboard takes some getting used to

My only qualm with the keyboard is that it uses a key shape that’s like a square at the top, but a semicircle near the bottom. Similar to a MacBook Pro keyboard, the Yoga 920’s keys are shallow with little travel. It takes a few rapid-fire paragraphs to avoid touching the wrong keys, but once you get used to it, it’s not much of an issue. Otherwise, a useful set of function keys adorn the top row. Meanwhile, the Fn + Space bar key combo controls the three backlit keyboard settings: off, dim, or bright. Unfortunately, there isn’t an automatic mode for the backlight.

Windows OEMs are slowly adopting Windows Precision touchpad drivers for their laptops and Lenovo is no exception here. Windows 10’s multitouch gestures are smooth, scrolling is natural, and the trackpad itself is large enough to avoid feeling cramped.

The pen is just about as useful as any other active pen bundled with a Windows 10 machine: it’s useful to doodle The Verge logo in a pinch, but not something I found integral to my day-to-day use.

Right out of the gate, the Yoga 920 comes with Intel’s new eighth-generation Intel Core processors. Never mind the low clock speeds; this chip generation is optimized for multitasking and battery conservation.

Intel’s Core i7-8500U chip inside the Yoga 920 is clocked at 1.80Ghz (1.99GHz TurboBoost), with 8GB of RAM to help it along, with a fast NVMe 256GB solid state drive. It’s excellent at multitasking and powers through heavy workload apps, like Photoshop.

If you’re really into using Cortana (or just your voice in general), then you’ll be glad to know the Yoga 920 has far-field microphones with a range of about 20 feet. However, if you’re more of a listener, then the twin JBl speakers have you covered. They sound excellent, with a warm and full-bodied sound. But they do have one flaw: poor placement. They’re underneath the front lip of the chassis, so they’re prone to being obstructed on a bed, or anywhere that isn’t perfectly flat.

The 1080p display won’t wow anyone with its pixel density, but it’s a very serviceable screen for most uses. Viewing angles are excellent, meaning you can flip the Yoga 920 around into its tent mode and watch Netflix with a friend without having to elbow each other to see the display. Its colors are bright, with excellent contrast, and it has a suitable level of brightness. Above the FHD screen is a 720p webcam, which, unfortunately, lacks clarity and isn’t as good as most front-facing smartphone cameras. It can be useful for the occasional Skype call, but that’s about it.

That display likely contributes to the 920’s stamina on battery. It just won’t die. I’ve routinely been able to go between 11 and 12 hours between charges. That’s with Bluetooth off, at least 70 percent brightness on HD playback via Chrome, and some multitasking going on in the background. No matter how I slice it, the Yoga 920 has an excellent battery that outlasts the other 2-in-1 laptop of note, the Spectre x360.

Windows Hello can work well with a fingerprint sensor, which the Yoga 920 has. Unfortunately, it’s not the fastest sensor I’ve used. There is a brief pause before it seems like the Yoga realized my finger was even on the sensor. Compared to the Touch ID system on Apple’s MacBook Pro, the Yoga’s fingerprint sensor is noticeably slower. The facial recognition implementation of Windows Hello has also been faster on other laptops, in my experience.

The Lenovo Yoga 920 is the best 2-in-1 Windows laptop this year. The user experience is straightforward, it benefits greatly from having an eighth-gen Core processor, and it has excellent battery life and a robust, compelling design.

Overall, there aren’t major pitfalls to the Yoga 920, with only a few quirks that could easily be addressed in future iterations. It’s a solid pick for college students, creatives who want an active pen experience, or anyone who wants to know how good a 2-in-1 really is.